Excellent bobwhite hunting reported and a favorable forecast for breeding Despite not having a good late hatch last breeding season, quail hunting has been exceptional. Reports from several managers in the Red Hills region and Albany area indicate that bird numbers are up 5–10%, with some properties being up as much as 45% in terms of coveys moved per hour. In central Florida and the Carolinas, our study sites also indicate similar good fortune with bird numbers being up >45% on each property being monitored via radio-telemetry. We believe the good bird numbers in the fall along the east Coast are in large part due to excellent chick survival during the 2019 breeding season, resulting in an increase of first-year birds being recruited to the hunting season. This has been substantiated by harvest ratios averaging 75-80% for first-year (juvenile) birds.

Overwinter survival is about average through February on 2 of 3 properties we are monitoring in the Red Hills (62% and 48% at Tall Timbers and Dixie Plantation, respectively), and Albany region (>60%). During our January quail trapping season, we continued to observe high cotton rat numbers, and given the relatively mild winter, we are optimistic for a good carryover of cotton rats, as well as a good carryover of bobwhite to the 2020 breeding season, setting the stage nicely for the upcoming breeding season. However, the same mild conditions profiting cotton rats has apparently affected raptor migration patterns as well, especially Buteos (red-tailed hawks and red-shouldered hawks).

During December, we observed higher overall raptors numbers (see Figure 1– Fall Raptor Counts), especially Butoes, such that migrating hawks stayed in the region longer than usual, likely due to the warm conditions early and presence of a healthy prey base. Contrary to higher Buteo numbers, Accipiter abundance ( e. g. Cooper’s Hawks) has been lower than typical throughout the fall and winter, so far, likely offsetting higher mortality associated with Buteos. The cooler weather observed in January finally compelled many raptors to move farther south; they have not yet begun to migrate back north, resulting in lower than average numbers during the late winter (Jan and Feb) months so far, as indicated by our weekly raptor counts (see Figure 2). Typically, when raptor numbers are lower than normal in January and February, they are higher than normal in March and April. As such, careful consideration to management during the burning season will help to reduce the most important pinch point of the year for bobwhite—the inextricable interaction of burning, bobwhite covey break-up and raptor migration. In addition to broadcast supplemental feeding in good habitat areas, we recommend burning at small scales and distributing timing of burns throughout March, April, and May. This should facilitate keeping as much cover for as long as possible and mediate predation risk of bobwhite until the raptor migration back north is over. 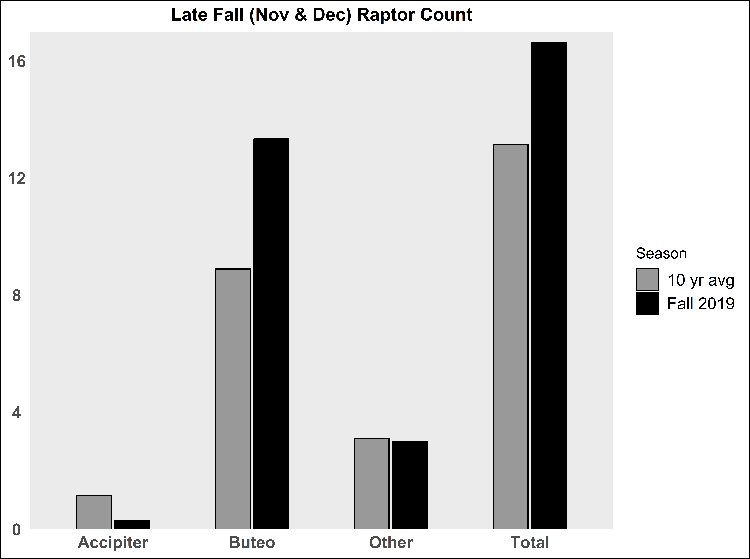 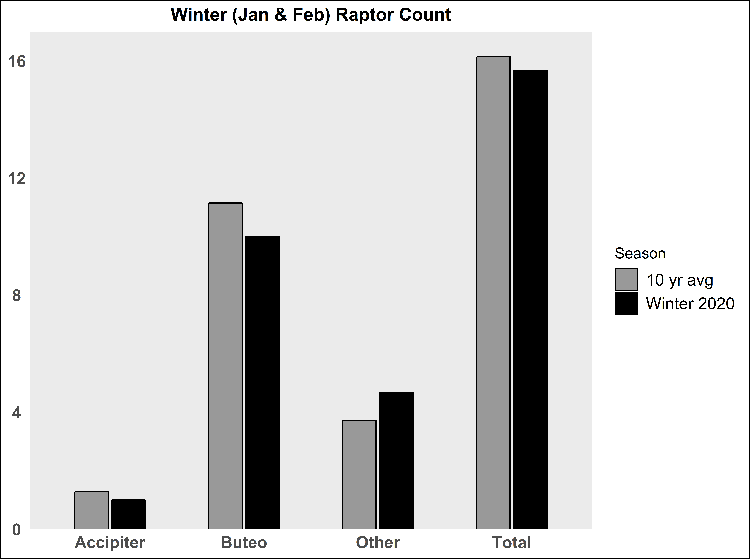