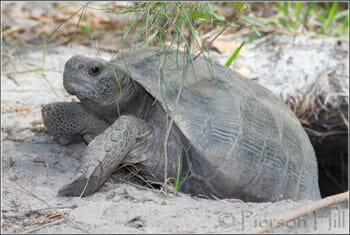 The Fish and Wildlife Service (FWS) received a petition by interested parties to request the gopher tortoise be considered for federal listing throughout its range. Currently, the gopher tortoise is listed as federally threatened in the western portion of its range, which includes eastern Louisiana, Mississippi, and west of the Mobile and Tombigbee Rivers in Alabama. In response to the petition the FWS conducted a review that detailed the causes for population declines. The FWS determined there is enough evidence of potential threats to the population to list the gopher tortoise as federally threatened across the entire range. FWS however, has deferred listing at this time due to budget constraints and a current backlog of species petitions. The gopher tortoise will be listed as a candidate species by the Endangered Species Act (ESA) and although no federal protection (state laws still apply) is available to the tortoise under this listing, the FWS encourages voluntary cooperative conservation efforts for the tortoise since it does warrant future protection under the ESA. 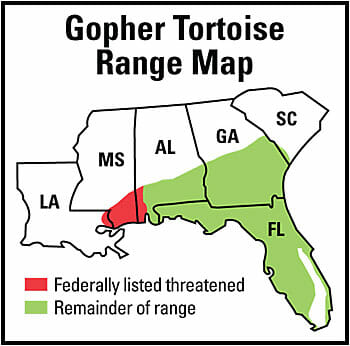 Throughout the Red Hills and Albany plantation regions, quail management benefits a whole suite of other fire-dependent wildlife, including the gopher tortoise.  Frequent prescribed fires, open pine timber management, nest predator management, and overall good land conservation have helped maintain the gopher tortoise populations.  We need to act to keep the gopher tortoise from being listed for several reasons, including conducting sound conservation but also avoiding burdensome regulation.  Therefore, Tall Timbers is taking an active role as a liaison between our membership and wildlife officials to ensure that landowners can continue to manage their land for quail without potential future regulations influencing management actions.  At the same time, this is an opportunity for landowners to be rewarded for conducting sound long-term conservation sustaining the tortoise population. To do so, Tall Timbers is considering developing voluntary programs in collaboration with landowners and the FWS where landowners can seek protection from future regulation if the tortoise is ultimately listed.

The next step includes hosting meetings with landowners and managers to consider options available and help chart the best conservation solutions.  Other important steps include monitoring the population to find out its status and population trends. By doing inventory work and continuing good land management, the quail plantations, as a group of private landowners, may be able to manage their gopher tortoise populations on their own regardless of how the species may be listed in the remainder of its range. Tall Timbers is also investigating how potential Federal program monies may be available for landowners to continue to do the things they already do, such as prescribed burning and hardwood control.

The goal is to keep the tortoise from federal listed status. By working together and realizing that all involved parties bring opportunities and knowledge of the issues, landowners can continue conducting dedicated land management without excessive oversight and ensure the gopher tortoise will continue to thrive in our region.

If you are interested in learning more about gopher tortoise programs available in your area you can contact the FWS, the state, or Tall Timbers.