The Stoddard Bird Lab is going to the dogs! 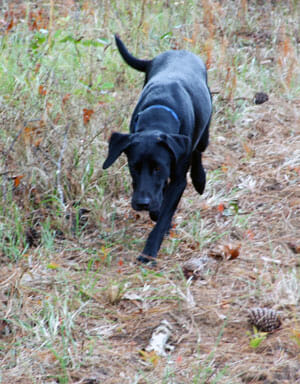 The Stoddard Bird Lab at Tall Timbers welcomed its newest intern last week. She’s a bit young as interns go (only 2 years old), but we’re hoping she has a nose for success.

Lilly, a black lab, was donated to the Stoddard lab by Mr. Greg Oyer, the principle dog trainer at Beechwood Plantation. She’s been yard trained at this point and seems very eager to please, and the next several months will be spent training her to find nests of rare ground-nesting birds such as Bachman’s and Grasshopper Sparrows.

Biologists have been utilizing the unique olfactory capabilities of trained detection dogs to perform a number of research and conservation tasks in recent years. A black lab mix in the state of Washington now spends the better part of each day riding around Peugeot Sound in a boat with its nose cast into the air. The dog is trained to locate scat left behind by killer whales, which are listed as endangered in the region. It turns out whale poop contains a treasure trove of information about the health and diet of whales in the area, and the dog has proven essential in finding the stuff.

Sparrow nests are some of the most difficult nests in the world to find because they blend in so well with ground cover vegetation. The adults also are extremely suspicious when large animals (including biologists) come into their territories and will do everything in the world to divert attention away from the nest. Unlike quail, the sparrows also are too small for use of radio transmitters for extended periods.

This is the first time such an approach has been taken with southeastern pine-grassland sparrows, but chances of success seem high. Trained dogs have been used to find rare plants, tortoises, snakes, fire ants, and a host of other rare species. We’re confident Lilly will point to the way toward additional areas where a refined nose will be helpful.

You may also have noticed a new phrase in this Bird Note: the Stoddard Bird Lab. The lab has been known as the Vertebrate Ecology Program for the past decade — a nine-syllable vagary that has little connection with the long history of bird work conducted at Tall Timbers. Henry Beadel, the founder and chief benefactor of Tall Timbers, collected bird data on Gannet Pond beginning in 1936 and mentions study of songbirds in his will. The first official research program ever sponsored by Tall Timbers was the famous tower-kill study launched by Herbert Stoddard in an effort to understand bird migration in the region. The name change makes the point that bird research has a special place at Tall Timbers and also pays tribute to the greatest biologist to ever roam the halls of the station.