Old-field pinelands, where stands of loblolly and shortleaf pines have arisen from crop fields abandoned decades ago and managed with frequent fire, are well known in the Coastal Plain for being good quail hunting land. Perhaps less recognized is the fact that old-field pinelands represent a grand experiment in ecological restoration. We in the Fire Ecology Program have conducted various studies to look further into the ecology of old-field pinelands as compared to their humble agricultural origins, as well as native longleaf pine-wiregrass communities. One of our goals is to understand to what degree doing little more than burning an abandoned agricultural field on a two-year interval can eventually restore the fire-dependent native longleaf pine ecosystem. 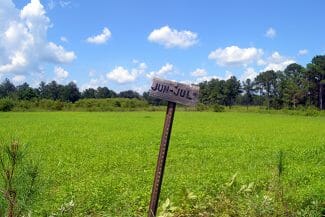 Soil, which makes up the half of the ecosystem we cannot see, is a key factor in ecological restoration. We took advantage of the Whitcomb Plots on Tall Timbers Research Station to compare soil quality between plots annually tilled in different months of the year and those where tilling was replaced with biennial fire and natural establishment of loblolly and shortleaf pines, beginning in 1969. We also compared soil measurements between the Whitcomb Plots and native longleaf pine communities, which have never been plowed. Student researcher Amberlin Hines from Gallaudet University has been helping prepare a manuscript to publish the following results.

The effect of farming on soil texture (percent sand, silt, and clay) appears to be permanent, resulting in clay percentages in the surface soil that are more than twice as high as those in native pine communities, presumably because of erosion of the sandy surface horizon during farming. However, soil bulk density in the old-field pinelands was about half way between tilled fields and native sites, indicating that the old-field pinelands are increasing in aeration and water permeability on a path towards native soil conditions.

Phosphorus and potassium were found to be much higher in the disked fields and old-field pinelands than in native sites, probably because of liming of fields and the higher clay content in the surface soil. Calcium and magnesium levels were about half way between disked fields and native pine soils, suggesting steady increases toward native conditions over time.

Importantly, total organic carbon is about the same between the old-field and native pine sites and twice as high as in disked fields. It appears that restoration of disked fields to frequently burned old-field pinelands is a valuable tool for restoration of carbon sequestration to native conditions. Also, both mineralizable carbon and mineralizable nitrogen (forms readily available to plants) were about two to three times as high in the old-field pinelands than in the currently disked fields, promoting higher plant productivity and health.

Stratification of soil nutrients with cessation of tilling is also quite evident. In tilled soils, levels of calcium, magnesium, total and mineralizable carbon and nitrogen, and bulk density were vertically mixed from 0-20 cm due to tilling. In contrast, each of these variables were more highly stratified after decades without disking, specifically with soil nutrients and carbon concentrated near the soil surface where plants can most easily use them. Stratification indices, or ratios of soil measurements between the 0-5 and 10-20 cm depth intervals, showed a steady increase from tilled fields to old-field pinelands to native pinelands, suggesting that this quality of soil in old-field pinelands is also on a trajectory towards native conditions.

While the partial loss of the sandiest surface layer may be practically irreversible, by most measures the transition from tilled fields to burned pinelands represents a strong trajectory toward native soil restoration and greater soil health. This change is important for its expected effect on which native plant species are able to become established over time. Our plant community studies show that numbers of native plant species in old-field pinelands more than 50 years old are about half way between tilled fields and native communities, suggesting improvement of conditions for many but not all plant species, and restoration of the basic pine-grassland community structure. In turn, old-field pinelands provide viable habitat for red-cockaded woodpeckers, Bachman’s sparrows, gopher tortoises, Sherman’s fox squirrels, and many other species of special conservation concern. These results have important implications for current efforts to restore longleaf pine ecosystems on recently abandoned fields, which promise to significantly improve soil health, biodiversity, and ecosystem services — if managed with frequent fire and timber thinning over the long run.