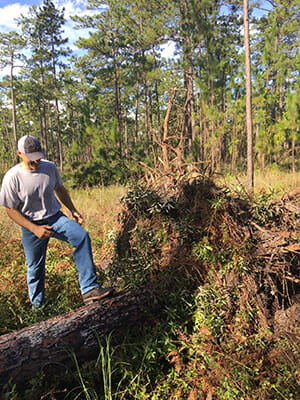 Last month, a storm event uprooted approximately 40 trees on Greenwood Plantation, in Thomasville, Georgia. Greenwood Plantation is one of the few locations remaining in the Southeastern Coastal Plain that has significant acreage of old-growth longleaf pine and intact native groundcover. While the trees blown down represent a small disturbance that won’t have lasting consequences for that forest, it created an opportunity to better understand growth of older longleaf pine.

Conventional wisdom is that longleaf pine growth slows with age, but recent work on old growth around the country indicates older trees grow faster but store more carbon in their crown with age. These large trees, now fallen, allow easy access to test that assumption, which is largely based on measurements taken near the ground (at the height convenient for foresters and ecologists). In our new study, we aim to create a more accurate and comprehensive picture of carbon storage by longleaf and how it varies with factors including tree age, tree size, and stand characteristics. One key determination we hope to make is to better capture the contribution of large branches to carbon storage. Old longleaf often have enormous branches that give older trees their flattop appearance—a characteristic that is not adequately accounted for by longleaf growth and yield models. Another key area of uncertainty is in how stem growth may vary along different heights of the tree bole. We have collected tree cores from the base, mid-trunk, and canopy areas of the downed trees to see whether tree-ring widths vary with height. To complement this data, we are also using new terrestrial LiDAR scans that collect high density laser points of Greenwood plantation to measure all trees at the forest scale. These points, when sewn together, will allow precision measurements of trees in a 12 hectare area and give us a better idea of carbon storage at the forest scale.

This research is a collaborative effort including several staff at Tall Timbers (Kevin Hiers, Scott Pokswinski, Monica Rother), University of Georgia graduate student Joseph Hansen and his advisor Doug Aubrey, and US Forest Service ecologist Louise Loudermilk. Eventually, the research may include additional work at the other two primary locations of extensive old-growth longleaf with intact groundcover in our region: Eglin Air Force Base and the Wade Tract.

Above right photo, Kevin Hiers with a longleaf pine that blew down after a storm in July of this year. 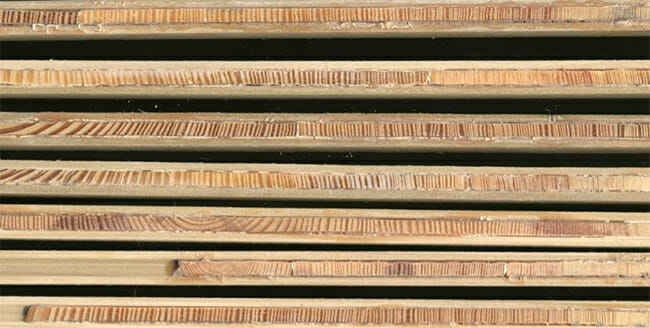 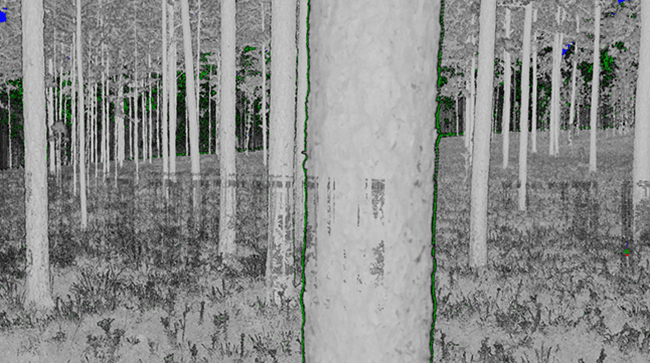 An example of a single forest scan using the Terrestrial Laser Scanner on loan from the University of Montana. Each scan contains up to 100 million points and travels a distance of 500 meters. The scans will be used to complement biomass measurements of the individual trees and scale them up to the forest.