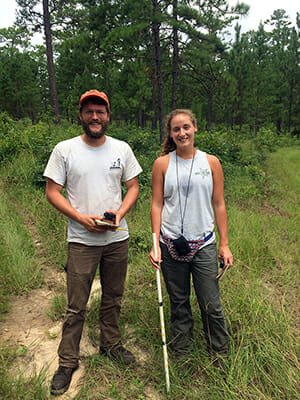 With help from the Stoddard Bird Lab, research biologists from the Jones Ecological Research Center near Albany have been digging up some new dirt on one of our most reclusive animals. J. T. Pynne (left) and Danielle Clark (right) spent a week this July walking mile-long transects on several different properties in the Red Hills. Their goal was to find the tell-tale mounds of the pocket gopher, a small 8-inch mammal that rarely emerges from its subterranean lair.

Pocket gophers are named for the large, pocket-like cheeks they possess, but most folks locally know them as “sandy-mounder” or “salamander”. The fur-lined cheeks hold large quantities of roots and other foods that pocket gophers gather as they roam their burrows (not to carry soil, as some folk tales suggest). The pocket gopher also has long front claws, small eyes and ears, and a naked tail that is thought to help dissipate the heat that might build up in a warm, humid burrow.

Although the animal thrives in the frequently burn pine uplands of the Red Hills, it has become extremely rare elsewhere within its range.  It once ranged throughout the coastal plan in Alabama, Florida, and Georgia, but it’s considered imperiled in Georgia and is listed as a species of conservation concern elsewhere.

“We’ve surveyed about 75 different regions in Georgia thus fare but located pocket gophers only in 3 of the regions,” Pynne reported. “As you can guess from this low encounter rate, most of our transects yielded absolutely nothing, but we’ve encountered dozens of pocket gopher mounds on each of the transects conducted here in the Red Hills region.” “It’s been great to see their mounds so regularly on all these private properties” he added.

Although reclusive, pocket gophers play an important role in upland pines by aerating soils and recycling soil nutrients. They dig rapidly with their noses to the ground, and some estimates suggest a healthy population may recycle as much as a ton of soil over the course of a year. All this churning and digging can enhance the diversity of plants, and the burrows also provide important refugia for up to 80 different types of insects, including 14 species that to occur only in burrows.

The Stoddard Bird Lab helped coordinate access to different properties and also steered the gopher&ndandashseeking duo to the random starting points within each property. Assisting outside researchers is a common service that the staff of Tall Timbers provides as needed. After all, when you live and work in a place like the Red Hills, it’s important to share your good fortune as much as possible.

Watch a pocket gopher dig in this short on-line video posted by the Florida Fish and Wildlife Commission: https://www.youtube.com/watch?v=WCUxKZP1kS8