Improving estimates of smoke from fire

Air quality agencies estimate various emissions from wildfires and prescribed fires by multiplying together estimates of the area burned, fuel consumed per unit area, and the amount of emission per unit fuel consumed, called the “emission factor” (EF). The Fire Ecology Program and researchers at Florida A&M University have been collaborating to improve estimates of emission factors for particulate matter (smoke particles) smaller than 2.5 microns (PM2.5), which poses a health risk and is regulated by the Environmental Protection Agency. 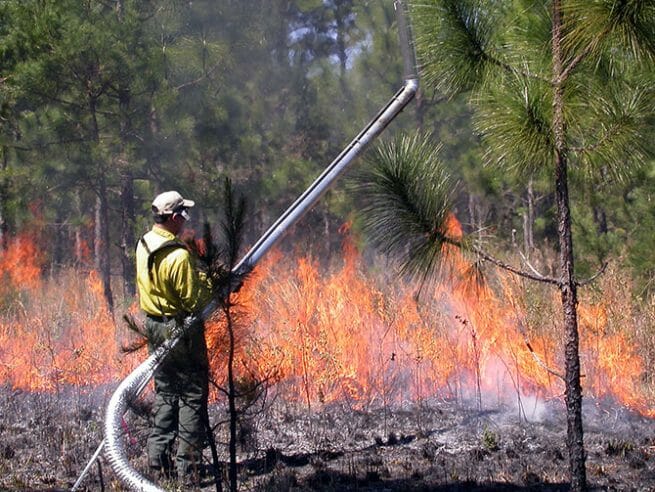 PM2.5 EF is typically measured by comparing the amount of PM2.5 released during the fire with the amount of carbon gases released, mostly carbon dioxide (CO2) and carbon monoxide (CO), which in turn indicates how much fuel was consumed. The traditional method assumes that the difference between CO2 + CO measured in the fire plume and CO2 + CO in the ambient (pre-fire) air represents the the amount of CO2 + CO released in combustion. However, because combustion processes can be complex and produce various products, it was possible that this assumption is not precisely true. We sought to test this assumption by more directly measuring which CO2 and CO was from the fuel versus that from the ambient air, using their different carbon 13 isotope signatures.

We found that the concentration of CO2 from ambient air found in the fire plume was higher than expected. This may be because the production of CO2 from combustion is slightly slower than the entrainment of CO2 from the ambient air. The result is that estimates of PM2.5 EF using the traditional method are 15% too low. This bias can be corrected for in future estimates using a correction factor. 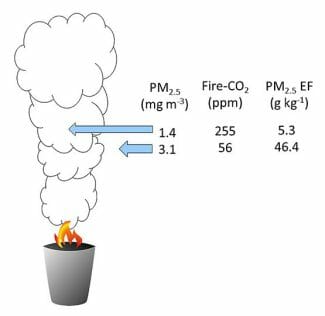 We also tested the assumption that the ratio of CO2 to PM2.5 remains the same in the fire plume following combustion, which is an important assumption for accurate calculation of PM2.5 EF. In an experiment where we burned wood in a drum, we measured PM2.5 and gas (CO2 and CO) at different heights within and just outside of the fire plume. We found that, as long as the measurements were directly within the plume, the assumption of mixed gas and PM seemed good. However, if we measured just outside of the plume, there was a lot of PM2.5 but not much CO2, making the emission factor about nine times higher (see figure). Apparently if the mixture of PM2.5 and CO2 released from the fire is not within the rapidly rising fire plume, the CO2 and other gases quickly diffuse away, leaving the PM2.5 behind. Failing to measure directly within the plume, or else very soon after the PM and gases are released, is important for accurate estimates of emission factors.

These results were recently presented in a webinar to the National Wildfire Coordinating Group (NWCG) Interagency Smoke Committee (SmoC), which makes policy recommendations for better management and regulation of emissions from wildland fire, including prescribed burns.

The figure, above right, shows results from an experiment at Florida A&M University testing differences in estimated PM2.5 emission factors (EF) within and just outside of the fire plume.  Outside of the plume the PM and gases released from fire are not well mixed, making the estimate of EF too high.