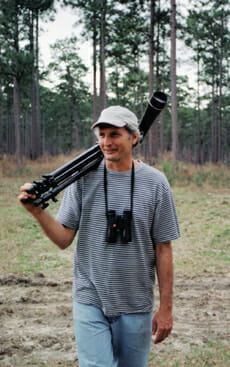 The Florida Chapter of The Wildlife Society has recognized Jim Cox for his “professional achievement and contributions to the conservation of Florida’s wildlife and natural resources” with the Herbert W. Kale, II Award. Since 2002, Jim has directed the Vertebrate Ecology Program at Tall Timbers where he, his graduate students and interns endeavor to understand the ecology and management needs of the many declining vertebrates closely associated with longleaf forests, including the endangered Red-cockaded Woodpecker. Cox is especially interested in understanding the role that the frequency, season, and scale of prescribed burning may play in regulating vertebrate populations. He also studies Bachman’s Sparrows, Brown-headed Nuthatches and most recently, with the award of a grant from the U.S. Fish & Wildlife Service, Henslow’s Sparrows. All are species that are declining throughout their range.

In announcing the award, Arnold Brunell, President of the Florida Chapter of The Wildlife Society, noted Cox’s “influence in promoting the conservation of sand hill habitats, restoration of longleaf ecosystems, and lightning-season burning.” Brunell also noted Cox’s “pioneering work using GIS technology as a tool for identifying critical conservation areas in Florida… and his exemplary communication skills that have educated and motivated many….”