With a strong la Niña event in the Pacific Ocean we could potentially experience drought conditions this spring lasting possibly into the fall. At the same time, according to the Florida Division of Forestry (DOF), this fourth strongest event is be moderated for the panhandle region due to other climate patterns. Accordingly, DOF is preparing for a severe fire season in 2011 in central and south Florida, but with less of a threat (currently) for north Florida. The potential for drought conditions has implications for both burning, burn permitting, and quail management. If DOF crews are fighting wild fires throughout the state, they may be reticent to provide as many permits in our area. South Florida has already seen increased wild fire activity this winter and DOF is expecting many more this spring. The DOF website provides a good synopsis of weather predictions and their fire forecast for the state http://www.fl-dof.com/fire_weather/forecast/seasonal_forecast.html .

What do these fire forecasts mean for quail management? Now quail populations are regionally good to excellent. Rat populations in the Red Hills remain high, red-tailed hawks are prevalent, and quail survival remains good. This bodes well for the upcoming nesting season. However, we have seen severe droughts in the past bring high quail numbers to an abrupt end. A good example of this scenario occurred between 1997 and 1998. The winter of 97-98 had regionally high quail numbers, normal rainfall, and heavy rains occurred during March of 1998. Then it stopped raining and turned hot and the following season there were noticeably lower quail numbers.

On properties that conducted large scale clean-up operations in spring of 1998, population declines were even more severe because cover did not respond. We measured one plantation course that declined from 2.2 quail per acre in 1997 to less than one quail per acre the next fall. Droughts have many influences on quail: they result in slower cover response after burning that can result in lower adult survival; if temperatures are severe they reduce egg-laying, hatchability of eggs, and chick survival rates; and they change habitat use of quail and quail broods. Managers can only influence some of these factors and it starts with careful burning. 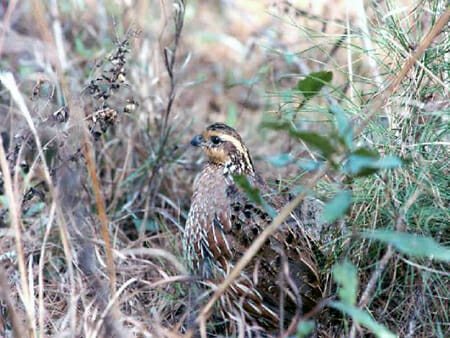 We typically recommend burning between March and mid-May to achieve quail management goals and reduce hardwood encroachment. Stretching out burning over several months, and leaving more cover during hawk migrations in March, can result in increased quail survival and bring more birds into the nesting season (hawks are likely to be more prevalent this March given severe winter weather that has pushed a lot of birds south). Another benefit of this is that vegetation in burns conducted later in the spring recovers quicker than earlier burns, which also provides both survival benefits and creates great brood habitat.

However, when drought is predicted, managers face a dilemma – burn early in March when conditions warrant but risk slow cover response if drought conditions occur, or burn later to avoid cover issues but risk not getting burning done due to fire bans.

The current weather forecast for north Florida and southwest Georgia indicate that fire bans are unlikely this year. However, being prepared to begin burning early this year would be wise. If the predictions for a dry April and May continue, then burning more this year in early March is an option. With high ground moisture content, cover will likely respond to early fire this year, which may mitigate cover concerns for quail.  If drought conditions do not materialize in northern Florida, then you can always stretch out your burning through April and into May. Either way, an important concept to keep in mind this year is to make sure burning is conducted such that each covey has access to unburned blocks of good size (10-40 acres). Be cognizant of cover when conducting mowing or chopping in the woods, if rainfall is likely to be well below normal.

In drought years, fields that are typically excellent brood habitat may not become useful until the second hatch (if at all). Quail with broods often rely on low areas and unburned blocks for rearing chicks. In drought years, especially in grass-dominated habitats, quail use wet-weather ponds, low areas, drains, and creek bottoms as brood habitat. We have seen broods move over a quarter mile within days of hatching to end up in drains. Therefore, it may be a good idea to burn through these areas this winter and early spring to prepare them as brood habitat this summer.