Have you ever tried to count to 22,000? It’s not easy, and it’s the kind of task that most of us would avoid like the plague or at least try to accomplish using some convenient work around solution (let’s just skip everything between 2500 and 12,500, okay?).

But for a stalwart group of forest ecologists, this will be eleventh time such a count has taken place. And not only do they count to a mind-numbing level, they also measure all the items counted. 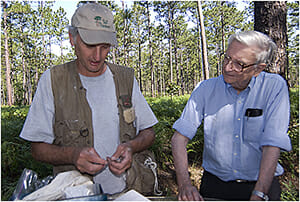 The study in question is the long-term census of trees on the Wade Tract. The Wade Tract is listed as a National Natural Landmark by the National Park Service and has been called a “…national treasure…” by noted author and Harvard-based ecologist E.O. Wilson.

In addition to being the only longleaf forest recognized as a national landmark, the Wade Tract also is the only old-growth longleaf tract that is protected in perpetuity and dedicated to long-term research, and it’s these virtues that make the tract truly stand out.

Beginning back in 1978, Dr. William Platt initiated a long-term study of the trees of the Wade Tract. Platt and his colleagues staked out a 130-acre plot within the tract and then proceeded to map and measure every single tree – all 22,000. Platt, an ecologist at Tall Timbers when the study was initiated, has since moved over to LSU, but he’s back this fall with colleagues conducting the thirty-fifth anniversary census of the Wade Tract.

“Over time, the census has helped to document the long-lived nature of longleaf pines as well as how pines, fire, storms, and lightning interact over time to shape the stand.”

“Of course some of the old giants fall each year but new recruits also come along, and one intriguing observation in this thirty-fifth anniversary census is the manner in which the clusters of young pines seem to be growing slowly outward along the edges,” Platt says. “It’s much like the cypress domes you find in Florida.”

The Wade Tract census has resulted in over 20 publications describing longleaf stand dynamics. The data also are used in many university classrooms to help teach about the analysis of complex spatial data. Each tree has been mapped as precisely as possible, so the interactions between growth, recruitment, and tree densities can be assessed in stunning detail for a living forest. 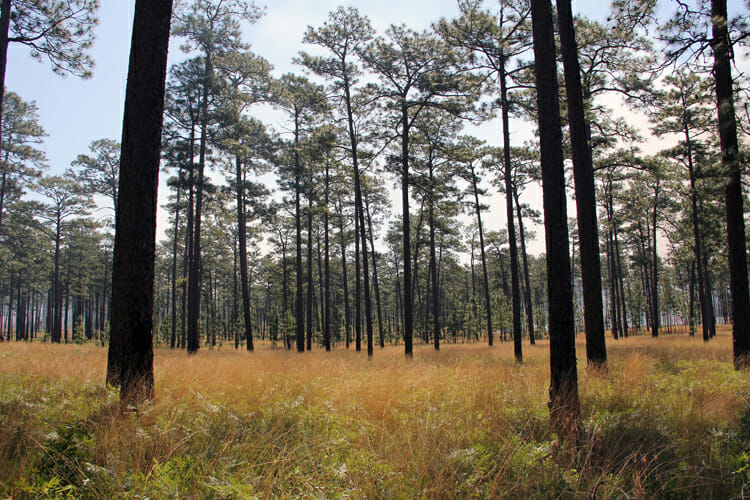 In the April 1952 issue of the Journal of Forestry, the Society of American Foresters' Committee on Natural Areas issued a request for locations of virgin forest types. They were beginning their search for specific undisturbed areas that might serve as a comprehensive base of knowledge about the natural developments within natural associations and to study the growth and change of these forests over time.  Most of the original longleaf landscape was lost at this point, but, thanks to decisions made by the Wade family, collecting the type of long-term data needed for understanding century-old forests was made possible. Thanks to Platt and his colleagues, the possibility became reality.

Support for this thirty-fifth anniversary census has been kindly provided by the Arcadia Research Foundation in addition to staff and departments at Tall Timbers Research Station & Land Conservancy. Support for long-term research projects is one of the most important things we can do as an independent biological research entity.