By Jim Cox, Director of the Stoddard Bird Lab

The lives of young animals are often shrouded in secret. Young animals rarely call attention to themselves and frequently are difficult to see simply because they are much smaller than adults. For many species, it’s a time in life to stay low, out of sight of predators, and simply try to get by until such time as you’re ready to act more like an adult.

Tom Radzio, a Ph.D. candidate at Drexel University, has been unearthing the rich, dark secrets of juvenile living for one of the most charismatic reptiles found in our pinewoods:  the deep-digging Gopher Tortoise. Adults typically live for decades unless they’re killed by dogs, coyotes, or cars, but young tortoises face a broad host of threats ranging from predatory snakes to birds and small mammals.

To avoid these predators, juveniles can’t simply use the large burrows that adults use.  Large burrows are often visited by snakes and other potential predators of young tortoises. Instead, Radzio has found young tortoises excavating burrows within hours of hatching. “They get right to it, often placing their first burrow under a small dead log and digging relentlessly like their lives depend on it.” Radzio says.

On the flip side of this need for shelter is the need for food and growth. For a gopher tortoise, that means getting your cold-blooded body up to a preferred temperature of around 90°F, a proposition that can be difficult to pull off in a deep, damp burrow.

Instead, juvenile tortoises spend lots of time basking in the sunlight, basically exposing themselves to help warm their bodies to a preferred temperature so that food can be processed and growth can occur.

Using video cameras and miniature data loggers, Radzio has found that young tortoises bask extensively right in front of the burrow entrance. In fact, the young tortoises take advantage of about 90% of opportunities they have over the course of a day to raise their body temperatures to their preferred temperature.

“When we go out into the field, we almost never see them out of their burrows, but the video tells a different story. They bask and move in and out of burrows all day long to keep a high body temperature, but hide just before we can see them,” Radzio notes.

Hatchlings also are very wary and use vibrations to detect potential predators, often hiding in response to putatively to non-threatening animals, such as curious Sherman Fox Squirrels.

The research suggests that the amount of sunlight reaching the ground near juvenile burrows is quite important to juvenile tortoises. Increased shading of the area surrounding burrows can take place as a result of fire suppression, over-stocked timber, and other land management practices. These practices obviously lower quail numbers as well, but also could reduce juvenile tortoise growth rates with potentially adverse population-level consequences. 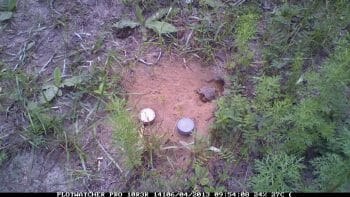 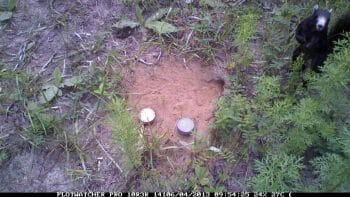 Figure 1a & b. Hatchlings are very wary and use vibrations to detect potential predators. Sometimes they even hide in response to non-threatening animals, such as curious Sherman Fox Squirrels. 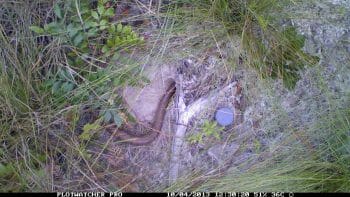 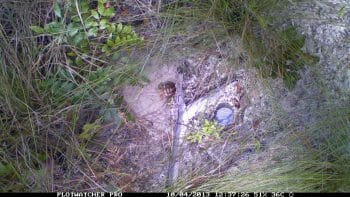 Figure 2a & b. The drive to bask is strong in young tortoises. Here a recently hatched tortoise emerges from its burrow to bask just 6 minutes after being visited by a Coachwhip (snake), a common predator of young tortoises. 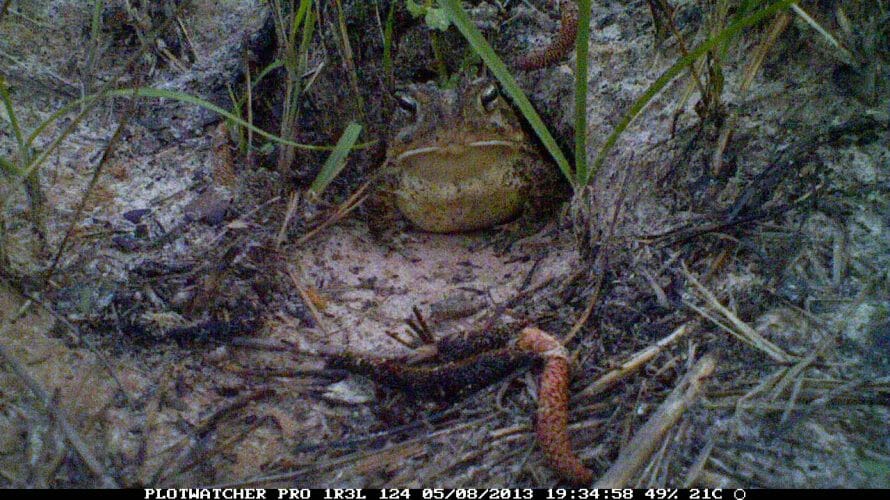