Thanks to a grant from the Florida Fish and Wildlife Conservation Commission, the Vertebrate Ecology Program recently completed genetic sampling of the brown-headed nuthatch population on Babcock-Webb Wildlife Management Area (WMA) in southwest Florida. Babcock-Webb supports one of the largest expanses of nuthatch habitat remaining south of Orlando, but the nuthatch population is isolated from other neighboring populations, so genetic information will help to determine whether genetic variation within this population has changed as a result of its isolation. Tall Timbers’ staff has developed some impressively efficient netting procedures for this bird that normally spends most of its time high up in the canopy — 35 individuals were netted in only 2.5 days of work! 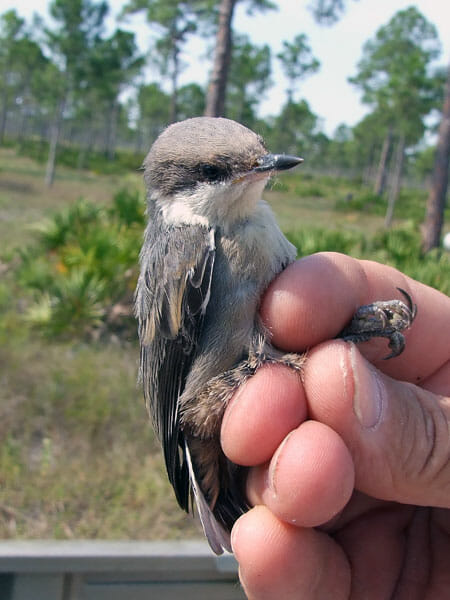 Finally, new methods for measuring Bachman’s Sparrow breeding-season productivity are being assessed on the Wade Tract. Young sparrows give distinctive call notes that can be used to estimate the number of young per unit area, just as easily as counts of singing males often are used to estimate the abundance of adults. We are comparing efficient line transect procedures with two more intensive forms of plot-based surveys in hopes of recommending some simple field procedures for measuring productivity for this declining species. Productivity may be a key measure of habitat quality in this species, because other data suggest that well over half the singing males never secure mates.