With a gentle breeze blowing off Lake Iamonia, some 200 guests celebrated the twentieth anniversary of the Red Hills Spring Dinner on April 8 at Tall Timbers. The dinner address was given by noted tax attorney, Stephen Small, who spoke at the inaugural dinner in 1991. 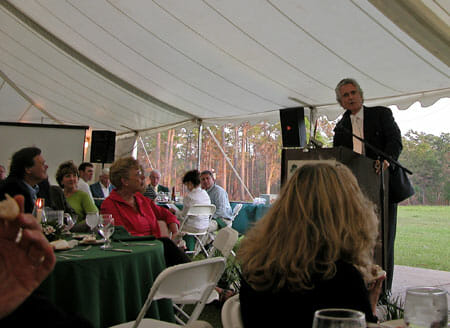 This year’s event showcased the 2009-2010 conservation easement donors. In addition, a special tribute was given to the late Kate Ireland, one of the founders of the Tall Timbers Land Conservancy. In paying tribute to Miss Kate, Lane Green remarked that she “was the driving force behind the entire conservation movement here in the Red Hills.” On a personal note, Green stated, “She was a neighbor, mentor, boss, and ultimately my friend.”

The dinner also honored three professionals whose distinguished careers made a substantial difference in saving the Red Hills region. The late Lou Clark was considered the “dean of conservation easement appraisers” in the South. In the Red Hills, he worked with landowners to protect over 80,000 acres. His assistant, Ms. Park Palmer, fondly remembered Lou’s integrity and modesty. He was a gentle giant in both stature and in his field of expertise.

Attorneys Tommy Vann and Duby Ausley were recognized for their leadership and guidance in helping Red Hills’ landowners with conservation easements. Speaking in praise of Tommy, Vann Middleton remarked that Tommy’s firm represented “small family farms such as the historic Moody Farm in Boston, Georgia to the larger and more complex Seminole Plantation easement. Tommy has worked with a wide diversity of clients helping each of them conserve their land and its precious natural resources for future generations to enjoy.” 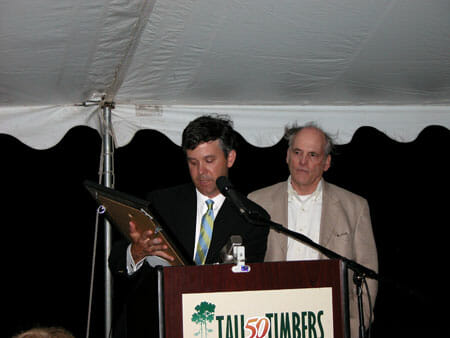 In his acceptance speech, Tommy observed, “The donation of a conservation easement is a team sport. If any member of the team falls down on his or her job, the whole house can collapse. It takes a charitably motivated conservation minded donor. It takes a qualified done organization, and Tall Timbers, in my opinion, is in the elite category of being qualified in this country to receive and administer conservation easements. It takes a competent lawyer to guide the client to record his or her wishes. It takes a good CPA to report the transaction and to defend it, if necessary. It takes a really good appraiser. In a recent case, I was dealing with an IRS appraiser who made an assumption at the beginning that we didn’t agree with. I said to him, ‘In railroad vernacular, when you start off on the wrong track, every station you come to is the wrong station.’ Stephen Small got us on the right track. I was at his first seminar 20 years ago, and he got me on the right track, and he got Tall Timbers on the right track. The landowners continue to be on the right track, but you have to be vigilant in your documentation, as Stephen said. You have to expect the most out of each member of the team, but remember to inspect what you expect.”

The final recipient was Duby Ausley. His firm has worked on 22 easement projects protecting over 35,000 acres in the Red Hills. Duby expressed gratitude for the honor he was given, and praised the work of Tall Timbers in preserving the beautiful Red Hills and in its quail research. Humorously, he acknowledged that he was an “accidental recipient” of honor at the dinner, since he originally opposed the idea of conservation easements for Kate Ireland’s Foshalee Plantation. Duby said he began conservation easement work when Miss Kate threatened to “get another lawyer” if he didn’t figure it out. So, he noted, “I figured it out!”In addition, he placed his own property, Mistletoe Plantation, under conservation easement with Tall Timbers. He added, “I am honored to be honored on the same podium as Tommy and Lou who are true professionals, and the same program as Kate Ireland because none of this would have happened if it wasn’t for Kate.” 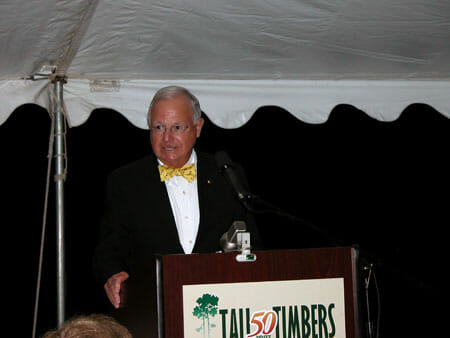 In his dinner address, and at his seminar held earlier that day, attorney Stephen Small spoke about Conservation Easements 2011: the Good, the Bad, and the Ugly, and the Next Decade. In referencing the good, he said that some twenty years ago when he gave his first speech at Tall Timbers, “it was all hope, it was all promise, it was a concept, it was all an idea that someday, maybe we’d get some conservation easements on some of these wonderful properties that make this a beautiful place to live. …That’s what was on the table in 1991, how special and how spectacular the Red Hills is, and is there something we can do to save it, to protect the open space, wildlife habitat, and the scenic views, and the quality of life and the lifestyle commitment that we’ve made? The good news is, it’s a reality now. There’s still a lot of work to do, but with 82 easements and 114,000 acres protected since 1991, that’s enormous. That’s real progress.”

The other good news he stated is the federal income tax incentives have never been better. Through the end of this year, a landowner donating a conservation easement can take 50% adjusted gross income off their taxes, and if a majority of a landowner’s income is derived from farming, ranching, or timbering, a deduction of 100% can be taken and carried forward fifteen years.

On the estate tax side, he commented that “the estate and gift tax rules in this country have never been more generous than they are right now.”With these incentives, he suggested landowners consider, “How does my family land fit into my overall estate tax situation, and is this a good time to do some planning to get my family land down to future generations?”

He talked about the “Bad and the Ugly,” and asked if there was anyone in the audience from the IRS. He spoke about bad conservation easement deals that are tainting the overwhelming good donations. According to Small, the IRS doesn’t like conservation easements, and is “on the warpath” auditing easements. Instead of rooting out overly inflated easement values or conservation easements that don’t have a clear public purpose, the IRS’ tactic is to win its cases on “technical points of law” such as not having acknowledgement gift letters. “You can donate the most significant easement in the history of the United States, and if you don’t have that gift letter, you can lose the deduction.” The IRS has been winning cases on these technical issues. He argued they should be going after the bad deals and bad actors.

He offered some tips on how to stay out of trouble with the IRS.

He concluded his remarks with four observations about the next decade.