Despite severe dry weather and temperatures flirting with 100 degrees, quail nesting rate on Tall Timbers is similar to last year’s statistics. Current nesting statistics show 0.36 nests per hen versus 0.32 for hens last year. Adult survival since the beginning of the nesting season is actually higher this spring on Tall Timbers, currently at 81%, versus 72% last spring. High survival of adults bodes well for a strong mid to late season hatch as drought conditions begin to moderate. We have had just enough thundershowers to adequate provide cover areas burned in early March and later burns are now starting to recover adequate ground cover. While still early, brood captures have demonstrated normal chick survival rate, which is critical to producing high fall populations.

One statistic that is off this year a bit is early male nest incubation. On Tall Timbers, male contribution to the hatch can be as high 40%, but this year only one male has incubated a nest thus far. Managers report seeing a few broods around, but we expect the rate at which broods are seen to increase by the end of June and early July. Some managers are concerned that this year’s hatch is behind last years. The combination of a large number of birds entering the nesting season, the slow recovery of habitat in burned areas (especially late burns), and dry hot conditions may all be contributing to this feeling. However, statistics from our radio-tagged sample show reproduction is basically on track again this year. 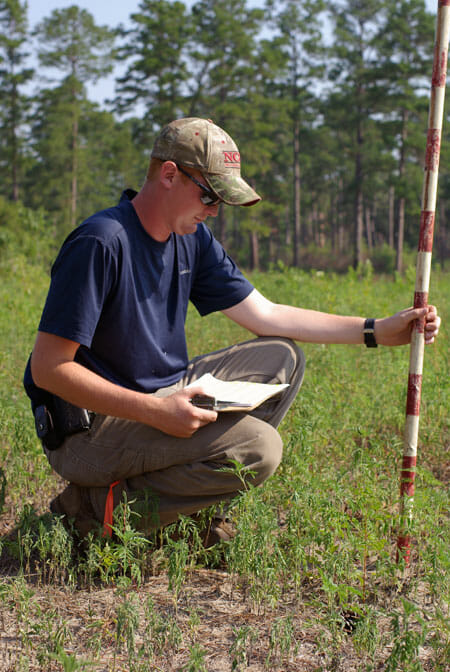 Game bird technician, Jonathan Garrow, is documenting recent vegetation conditions during the drought. Monthly vegetation surveys are part of the long-term data collection conducted at Tall Timbers Research Station. Game bird biologist, Shane Wellendorf, compared the June field vegetation data from last year to this year. The plant height went from 48 cm last year to 26 cm this year, a 46% decrease, and the plant canopy coverage went from 69% last year to 19% this year, a 72% reduction. These observations clearly document the impacts of the recent dry conditions on vegetation quality.

The Albany area has been suffering a more severe drought than much of the Tallahassee and Thomasville areas, with some sites receiving almost no rain in the last two months and temperatures over 100 degrees. Due to the sandy soils, cover in brood fields in Albany is highly dependent on rainfall; both burned woods and brood fields are currently lacking necessary cover. Bobwhite survival on our study area in Albany has not been as high as we would like (55%). This has been a problem for the last couple of years due to low cotton rat number, but is also being magnified this year by the weather. Nesting is currently at 0.20 nests per hen, which is not far behind where we were last year (0.22), however last year was also a low adult survival year. The end result of last years’ hatch was “hold your own” or a slight decrease in bird numbers. We are hopeful that rainfall will return soon and help produce a strong late hatch more similar to what we saw in 2008.

Bobwhites on our South Carolina Study area are showing nesting rates similar to that on Tall Timbers, with nests per hen at 0.35 as of June 8. Interestingly, half of the nests thus far have been incubated in May, whereas we had few May nests in Thomasville and Albany this year. So, bobwhite reproduction across our study areas show that despite dry conditions, nesting activity is about normal where some rainfall has occurred. The huge bird numbers on some Red Hills properties, combined with large over-winter carry-over may be dampening nesting on some sites. Where rainfall has been absent and habitat has not recovered, lower survival rates of adults, and perhaps lower nesting rates, will negatively influence the early hatch. Weather forecasts predict “normal conditions” returning for July through September. With adequate rainfall we have the opportunity for a strong mid and late season hatch, which will be needed on sites suffering the worst drought conditions thus far.

The study site in Alabama is holding up much like Tall Timbers and South Carolina, with survival at 75% and nests per hen at 0.32. According to Albany Quail Project director, Clay Sisson, this site has a little better soil and has had a couple of rain showers that Albany did not have.