Ability to predict fuel consumption during fires is essential for a wide range of applications, including estimation of fire effects and pollution emissions, which influence our ability to conduct prescribed burns. We are close to publishing results providing estimates of fuel consumption during 212 prescribed burns in southern pine forests under a range of land cover conditions, including native versus old-field pine forest, summer verses winter burns, and 1-4 years since last fire. We have also analyzed how fuel consumption is influenced by several fuel and environmental variables, including fuel load and moisture of various fuel categories, pine and hardwood tree basal area, temperature, relative humidity, days since last rain, Keetch-Byrum Drought Index, and Energy Release Component. 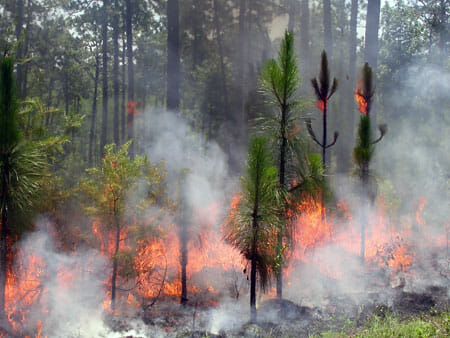 Overall, fuel consumption is higher in native than in old-field forests, higher in summer than in winter burns, and and higher with increasing time since last burn, reflecting higher initial fine fuel loads available for consumption. Percent fine fuel consumed was also related to the amount of initial dead fine fuel and was inversely related to moisture of partially decayed fuel on the soil surface. Surprisingly, higher relative humidity did not result in lower fuel consumption, suggesting that fine dead fuels are generally well dried out during the pre-heating phase as flames approach.

Comparison of our results with predictions by the widely used First Order Fire Effects Model (FOFEM) under similar conditions showed our estimates to be 30% lower than predicted when averaged over community type, season, and time since burn. These results suggest that pollution from prescribed burns in southern pine forests is being over-estimated. Our data will be provided to a data clearing house used by the developers of FOFEM and other computer models to improve their fuel consumption estimates, which are in turn used by air quality monitoring agencies for development of appropriate policies regarding prescribed fire.