To test the index on Tall Timbers, we stopped trapping nest predators in 2006, and have been monitoring nest predator changes. Our index began to climb rapidly in 2009 this past October (2010) was one of the highest we have measured at 48 visitations per 100 scent station-days. Had bobwhite nesting success remained high (45% to 65%) as in previous years, then that would cast doubt on our index of nest predation. However, as predicted by our index, nesting success has declined to only 28% this year. We suspect that the drought conditions early in the nesting season may have exacerbated predation on quail nests because of lower alternative food resources. 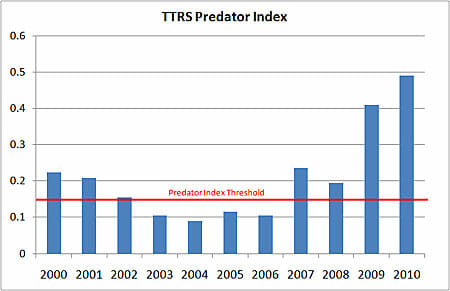 Nest predator index (i.e., the total number of visits to scent stations by armadillos, foxes, bobcats, raccoons, and opossums divided by the number of scent stations-days) on Tall Timbers showing most years predator abundance was maintained at or below our management “threshold” but without predator control numbers have recently spiked and are negatively influencing productivity of the population.

Quail populations are somewhat resilient to low nesting success because the hens re-nest, but at these low levels we are likely to see a significant drop in numbers this fall. Survival rate of adults has been good through the early nesting season, and nesting rate is very high (hens keep re-nesting after their nests fail), so we are getting some chick production. Had adult survival been low, re-nesting would not be as prevalent and the end result would be potentially severe population declines.

Nest predator numbers have likely increased regionally and our long-term monitoring demonstrates once again that controlling the level of mammal nest predators is an important aspect of managing for high density bobwhites and reducing variation in productivity from year to year. We will monitor the impact on our fall densities, but recruitment thus far has been extremely low because of so few nest hatches. Reducing nest predator abundance in the future, monitoring the response on the predator index and the quail population will further help test the utility of this program. Sometimes, doing things “wrong” (i.e., allowing nest predator abundance to increase), is important because it demonstrates why it is important to follow best management practices and reinforces what we think we know.