The previous couple of hunting seasons (2011/12 and 2012/13) were tough, but the story for this hunting season was much more satisfying. Many factors during the past couple of years such as high over-winter survival and good hatches contributed to overall ample bird numbers at the start of the 2013/14 hunting season. This combined with cold and wet weather throughout the winter made for good hunting conditions for much of the season. However, the colder winter weather also brought with it a significant hawk migration. We observed higher than average hawk numbers during January and April (see Figure 1) compared to long-term trends as well as an increased number of Cooper’s hawk mortalities on radio-tagged birds at the peaks. This underscores the importance of effective burn timing and scale to minimize overall avian predation on bobwhites during the burning season. Burning in small blocks, 40 -75 acres, and staggering burns through time increases available cover in an area, gives cover a chance to rebound following a burn, and reduces bobwhite movement while increasing their chance for survival. 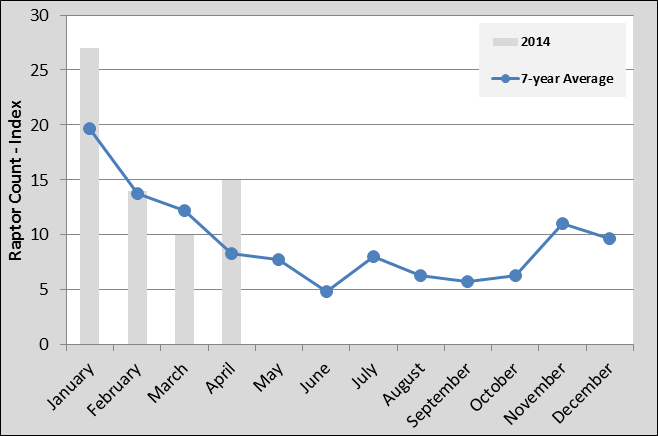 A plethora of rainfall over the past 4-6 weeks has provided for a quick rebound in cover on recently burned sites which may lighten the potential impact of migrating hawks and other sources of predation on bobwhites. Despite higher than average hawk numbers this winter, bobwhite survival remains about average to only slightly below average, and we have managed to carry about half of last year’s birds into this breeding season. Based on bird behavior of radio-tagged individuals, covey break up is ongoing, and we suspect pairing and nest building is right around the corner, if not already underway. With a little rain, good management and some luck it is shaping up to be a strong hatch this year.