If killing exotic plants—like Cuban Bullhead Sedge— is your business, business is good

About five years ago an exotic plant biologist described his job to me: “Killing is my business, and business has been good.” Unfortunately in the five years since that conversation, I’m sure he’d still say “business is good.” Although success is continually being made against exotics, in the Red Hills we typically function at control levels and rarely reach total eradiation. Knowing what to look for is half the battle, and fighting an exotic species before they become established leads to the most success.

One exotic species that I’ve noticed a lot more of lately in the Red Hills is Cuban Bullhead sedge, Oxycaryum (also known as Cuban bulrush or burhead sedge). This aquatic species can reproduce in two ways, by seed or vegetatively through rhizome growth, making it a bigger challenge to control. Because it can spread by rhizomes Oxycaryum breaks off into floating mats, these tussocks clog waterways and also reduce open water. Tussocks can be extremely expensive and labor intensive to control, and by reducing open water it limits landing areas for ducks and foraging areas for wading birds. 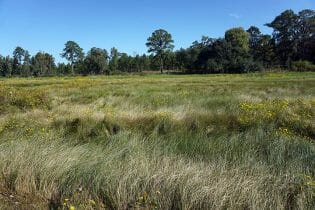 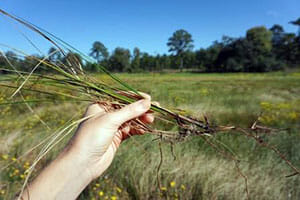 The dominate grass seen in this photo, above left, is Oxycaryum (Cuban Bullhead sedge) in Gannett Pond on Tall Timbers. We first noticed this plant in the pond in late 2014. At right, close up of Oxycaryum showing the spreading rhizomes. 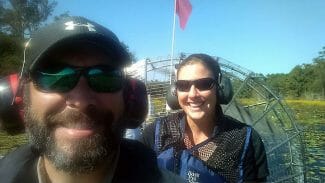 In my quest to learn more about this exotic plant, I recently rode an airboat with FWC Biologist, Derek Fussell, on Lake Iamonia in Leon County, Florida to look for Oxycaryum. With little effort we found it in plentiful amounts. It is prevalent along the shoreline, and was mostly seen in the mud flats at the edge of the maidencane and the water. Fussell is mapping the Oxycaryum and having crews spray it when the plant is actively growing. Fussell said, “They have had good results with a combination of 2-4,D and Diquat together and have just this year sprayed with glyphosate (7.5 pints/acre) and Flumioxazin (4oz/acre) and thus far the results look good.”  In 2013-2014, 1,614.34 acres were treated in Florida public waters.  This includes 335 acres in Lake Iamonia, 26 acres in Lake Jackson, and 141 acres in Lake Miccosukee.

Management techniques on private lands are less studied. FWC or their contractors typically spray from an airboat in order to get to the shorelines where Oxycaryum is most prevalent. On smaller ponds drawing down the water and then spraying or burning and then spraying may be a more feasible option. When Lake Iamonia floods, water from the lake overflows on Tall Timbers and into Gannett Pond, we assume this is how our pond got infested with Oxycaryum. Tall Timbers land manager, Eric Staller, will be treating Gannett Pond next spring, and we can update folks with what we found works the best. In the meantime, the best defense against this plant is to know what to look for and to attack it early before it gets established.