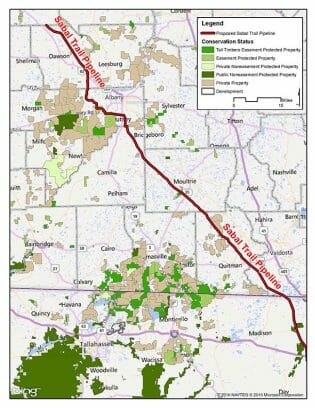 On October 26, 2015 the U.S. Environmental Protection Agency (EPA) released its review of the proposed Sabal Trail natural gas pipeline. This pipeline is slated to begin in Alabama and run through southwest Georgia for nearly 200 miles before entering Florida, terminating in Osceola County. Of particular interest to Tall Timbers is the portion of the pipeline route that winds its way through Dougherty, Colquitt, and Brooks Counties, avoiding most quail hunting properties while directly impacting several others.

The EPA’s review, which can be found here, outlines a number of “potentially significant environmental issues” related to drinkingwater supplies, wetlands, conservation areas, minority communities, and air quality. Of particular concern to the EPA is the proposed pipeline route over the vulnerable Floridan Aquifer, the sole source of drinking water for millions of residents of Southwest Georgia and Florida. The EPA states that the proposed pipeline is “expected to have significant impacts to karst areas in the state of Georgia and Florida and represents a potential threat to groundwater (and surface water) resources.” Accordingly, the EPA requested that the Federal Energy Regulatory Commission (FERC) develop an alternative route avoiding the fragile Floridan Aquifer. In its statement, the EPA rated the Draft Environmental Impact Statement’s preferred route as “EO-2,” a designation meaning the Agency has environmental objections to a significant part of the proposed route.

The EPA also discussed the sinkhole-prone nature of the karst geology underlying Dougherty County and the resulting threat for land subsidence, potentially leading to a failure of the pipeline. Another major concern expressed by the agency was the location of a proposed compressor station near Albany, Georgia. The proposed station has become a flashpoint as it is the only compressor station that is located in an urban area along the route. The location, near a low-income, largely minority residential community, has led to pointed questions and criticism from several members of Georgia’s Congressional delegation including Representatives Sanford Bishop, Hank Johnson, David Scott, and John Lewis.

Given its many concerns, the EPA has requested that the FERC fully and objectively evaluate an alternative route to avoid the vulnerable Floridan Aquifer, as well as minimize the impact to wetlands, conservation features, and low income communities.

Tall Timbers, while not taking a formal position on the Sabal Trail pipeline, provided comments to the FERC. Tall Timbers raised several of the same concerns discussed in the EPA’s response to the Draft EIS including the vulnerability of the karst geology in Dougherty County and the resulting potential for adverse impacts to sole source drinking water supplies. Tall Timbers and others questioned why the FERC required much more stringent geotechnical analysis of a proposed pipeline in a similar area of extensive karst geology and sinkhole terrain in Pennsylvania.

In that instance, FERC required the builders of the Atlantic Sunrise Pipeline in Pennsylvania to provide detailed surveys of suspected karst features, ground-truthing, and extensive mapping of sinkhole vulnerable zones for the entire pipeline. By comparison, the Draft Environmental Impact Statement for the Sable Trail project includes the review of only 11 karst features along 300 miles of pipeline route, including analysis of only two sinkhole features.

Tall Timbers also raised the potential for ground subsidence leading to pipeline failure. In fact, more than 300 sinkholes formed in the area of the proposed pipeline following flooding in 1994. More recently, 23 sinkholes developed at the Albany municipal well field following droughts between 2003 and 2007. Other issues raised included potential impacts to springs, many of which are unmapped in Southwest Georgia and provide a direct connection to the aquifer. Finally, Tall Timbers raised the possibility of negative impacts associated with horizontal drilling at crossing points along the Flint and Ochlockonee Rivers. Notably, the Flint River is a Georgia High Priority Water and a Georgia Protected River Corridor, vital to the local communities that have grown up along the River.

The FERC is reviewing the comments submitted by the public including those provided by attorneys representing a number of organizations with conservation interests in Southwest Georgia such as the Flint Riverkeeper, the Chattahoochee Riverkeeper, and the Sierra Club, as well as large and small landowners throughout the proposed project area. The review and subsequent FERC response could take one or more months.