Tall Timbers recently secured a successful resolution to a challenging advocacy issue with the signing of a Settlement Agreement with Hoover Treated Wood Products, Inc. Hoover, which treats lumber using a fire retardant process at locations around the U.S., announced in February it would be opening a new facility near Havana, Florida adjacent to Coastal Forest Resources. The site for the proposed facility already had industrial zoning and was in close proximity to two Tall Timbers conservation easement properties. These two conservation properties are rich in aquatic resources including Swamp Creek, five ponds and associated wetlands, several ecologically diverse steephead ravines, and nearly 30 species of greatest conservation need as outlined by the Florida State Wildlife Action Plan. Tall Timbers’ concern was that these aquatic resources would be especially vulnerable to stormwater runoff from the proposed facility.

In mid-March, following a period of negotiations with Hoover’s legal team, the company and Tall Timbers signed a Settlement Agreement in which Hoover agreed to Tall Timbers’ enhanced stormwater plan and to allow Tall Timbers’ engineering consultant to ensure compliance with the new plan. In return, Tall Timbers agreed not to oppose the permitting or construction of Hoover’s facility. Soon after, Hoover reached a separate Settlement Agreement with neighbors ensuring a larger vegetated buffer around the facility.

The result of these agreements is that the Hoover Treated Wood Products plant will move forward with its new facility in a county that is highly dependent on the forestry industry, while at the same time protecting water quality downstream of the facility, including Tall Timbers two conservation easements.

Tall Timbers is grateful for the willingness of Hoover Treated Wood Products and its Vice President, Tim Borris, to negotiate and reach consensus with us and surrounding neighbors to protect vital water resources in the Red Hills. For additional information, contact Neil Fleckenstein at 850-893-4153, x335. 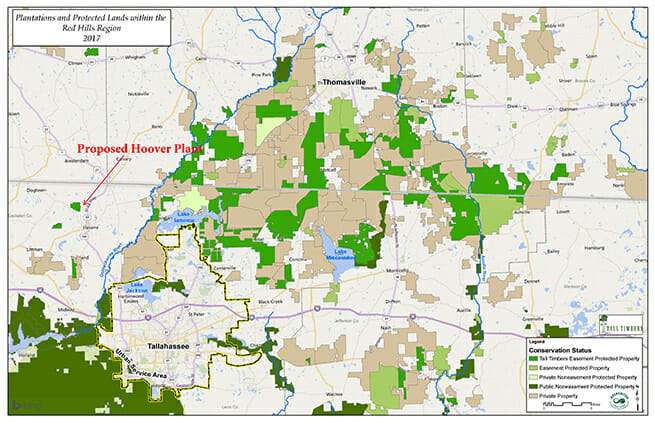