For a few years the Fire Ecology Program has interacted with the Yale School of Forestry and Environmental Studies, first through an invitation to program director, Dr. Kevin Robertson, to present at the Yale Forest Forum, facilitated by board member and Yale alumnus Redmond Ingalls. That meeting led to the joint Yale-Tall Timbers Fire Ecology Conference and Journal of Sustainable Forestry special issue titled The Fire Ecology of the Northeast in 2014. Since then students from the School of Forestry have annually visited Tall Timbers as part of their Southern Forest Field Course. Last year one of the students (Charlie Faires) returned to do field work and help write a paper on longleaf pine regeneration on the Wade Tract (see Winter 2019 eNews issue), which is now published in the journal Forests. 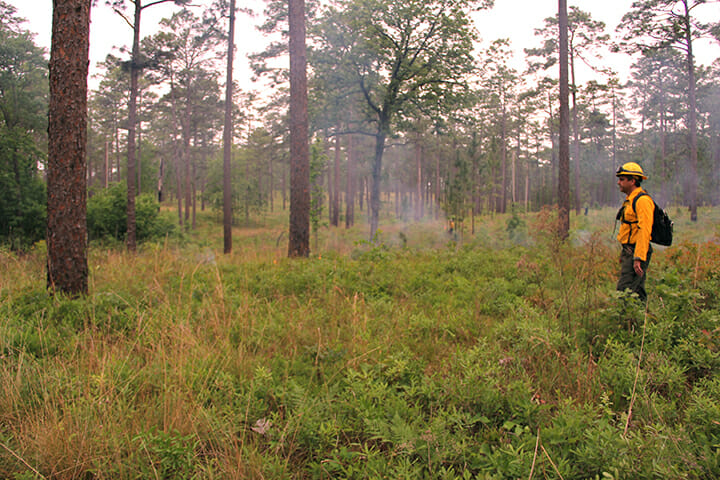 Kevin Robertson at the Wade Tract Preserve as he and his team begin a prescribed burn.

In April, Dr. Robertson was invited back to Yale to present results from the longleaf regeneration project at another Yale Forest Forum. Charlie Faires also arranged a special gathering of three Yale special interest groups — the Western Group, Fire Group, and Southern Group — for a presentation by Dr. Robertson on competing fire history paradigms in North American. He outlined differences between the anthropogenic fire versus lightning fire explanations for pine savanna origins, and presented examples of research using a comprehensive approach that considers both. The presentations were well attended and enthusiastically received, resulting in more students wanting to work with Tall Timbers in the future. Charlie and others hope that this association will contribute to a trend of more focus on the South by the School of Forestry, reflected by land management fellowships offered to Yale Forestry students on other properties in the Red Hills Region.