New collaborative work on the bird that launched Stoddard’s career

While it’s well known that Herbert Stoddard was a leading game bird biologist, it seems less commonly known that he also was one of the top bird scientists in North America. Not only did he receive the most prestigious award that the American Ornithologists’ Union has to offer (The Brewster Award), his study of the birds striking the WCTV tower was one of the first formal study launched at Tall Timbers and was the project to which he dedicated the final years of his life.

Stoddard’s fascination with birds dates back to his early years in central Florida. According to his memoirs, the discovery of the nest of a Common Ground Dove was an epiphany for this scrappy outdoor kid that also spent time trapping and hunting for sustenance. Stoddard wrote that the discovery of the nest “…. launched me on my career as a student of birds and marked my beginning as an ornithologist. This lifetime absorption began in that yard … where I watched the ground dove on her nest.”

As is the case for many of pine grassland birds studied by Stoddard, trends for the Common Ground Dove have listed downward for many decades, and the dove is now listed as a species of conservation in Florida, Mississippi, and South Carolina. 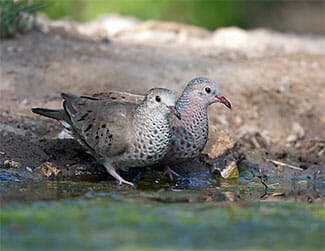 This past January, the Game Bird Program and Stoddard Bird Lab initiated a new collaborative study on the dove that could help to fill some important information gaps. It turns out that Ground Doves regularly find their way into the walk-in traps used for quail, and a simple mark-recapture effort focused on these birds might yield information on dove survival and movements that heretofore have never been assessed. Quail techs managed to trap and band 32 individual birds and recapture 12 individuals (with one individual being recaptured 6 times). These numbers are well within the range needed to provide important long-term information, but it will take a couple of years before survival patterns begin to emerge.

The distribution of birds across the property also was patchy and suggests Ground Doves may be focusing in on specific habitat configurations that are as yet unknown. This information could help land management and recommendations for CRP projects.

The lab also welcomed Matt Gould and Dave Pavlik to assist with work on Brown-headed Nuthatches this spring. Both techs are certified bird banders and have a tremendous amount of experience with the type of re-sighting work we do. Nuthatches are in the early stages of nest excavation at this point, and the Lab eagerly waits to see how birds are responding to the experimental treatments put in play in 2013.