Congress recently renewed, through 2013, an incentive that enhances the tax benefits of protecting land by donating a conservation easement. This invaluable tool has helped Tall Timbers accelerate the pace of conservation by working with willing landowners to protect over 52,000 acres on 51 family properties since the enhanced tax incentive was first enacted in 2006.

The legislation allows easement donors to:

According to Rand Wentworth, President of the Land Trust Alliance, “Taken as a whole with the gradual improvement of the real estate market and the reinstatement of the tax incentive this is a very good year for landowners to make a donation of a conservation easement.” Congress has a lot on its plate with the debt ceiling, sequestration, Farm Bill and other legislative priorities.  There is no certainty that the easement incentive will be renewed for 2014. The only certainty is that it is in place this year. 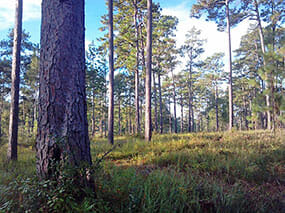 A conservation easement is a legal agreement between a landowner and a non-profit land trust like Tall Timbers, or government agency that permanently limits uses of the land in order to protect important conservation values. For example, typical Tall Timbers’ easements restrict the amount of building and development on the property, but fully allow the landowner the continued use of the property for productive farming, forestry, hunting and wildlife management. Easements allow landowners to sell or pass the land and on heirs. In return, landowners are eligible for federal, state and in some cases local tax incentives. For most easement donors in the greater Red Hills region, the appraised range of easement value for tax deduction purposes has been between 25 and 60% depending on location of property and terms of easement.

As an example of how the federal enhanced conservation tax incentives work, under the prior law, an agricultural landowner earning $50,000 a year who donated a conservation easement worth $1 million could take a total of no more than $90,000 in tax deductions. Under the new law, that landowner can take as much as $800,000 in tax deductions – still less than the full value of their donation, but a significant increase. Certainly landowners need to consult their financial advisors regarding their particular situation, but the incentive has been very popular.

There is strong bipartisan support in Congress for making the federal enhanced incentive permanent.  In the 112th Congress H.R. 1964 and S. 339 had 311 House and 28 Senate co-sponsors from 48 states, including majorities of Democrats and Republicans in the House. U.S. Representative Steve Southerland, II, Florida, District 2, supported the House Bill.