By Vann Middleton, Director of Operations and Support 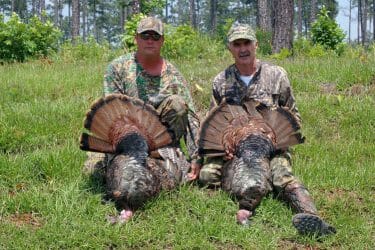 The 2012 Georgia – Florida Turkey Invitational was another smashing success and generated tremendous support for the Tall Timbers Game Bird Program. A full field of over 50 two-person teams from across the Red Hills Region competed for the coveted perpetual trophy and bragging rights for the year. A total of 31 mature gobblers were harvested on the morning of Friday, April 13; an unlucky day to be a turkey in the Red Hills! At the end of the day, a few familiar names found their way to the winner’s circle. Inaugural champions Walter Hatchett and Travis Sherman made it a “three-peat” in 2012, winning for the third time in the seven short years of the competition. Hatchett and Sherman, of River Ridge Plantation in Leon County, brought in another crusty old gobbler that scored 52.125, besting the rest of the field by a slim margin. Second place went to the team of Chris Wilson and Billy Benton, and third place went to Mason Hawkins and Tim Miles. 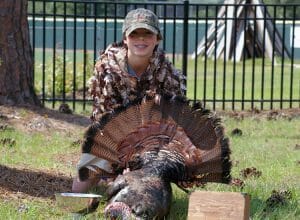 The Georgia Florida Turkey Invitational is a friendly competition among some of the most passionate turkey hunters in the Red Hills Region. The competition is also a key fundraiser for the Game Bird Program at Tall Timbers – helping fund critical research in the woods and in the lab. This year’s event raised over $20,000 for the Game Bird Program. Since the competition’s inception in 2006, over $140,000 has been contributed to our research efforts!

Many thanks to all who helped make this year’s event another great outing. A very special thank you to the Williams and Parker families for hosting the traditional Rules Dinner the evening prior to the hunt at their beautiful Osceola Plantation Lodge in Thomasville. A trio of professional turkey call makers was on hand to delight the crowd with their favorite tips and tricks. David Halloran (Great Valley, New York), Donny Richards (Brundidge, Alabama) and Ryan Giddens (Bainbridge, Georgia) shared their collective secrets to success while delighting the crowd with funny tales from the woods.

Tall Timbers would like to thank Mason Hawkins for generously hosting the luncheon and awards ceremony at Rosemary Plantation on the day of the hunt. Our good friends at Plantation Security provided another great fish fry for all to enjoy. Thanks as well to Tournament Coordinators John Daniel, Tim Miles and Bryan Knox for all of their help and support in organizing another great event. We look forward to another great time next year!