A report on this season’s quail hatch

Covey call counts on properties in the Red Hills and Albany Area indicate populations are down from last year about 25% on average,  with some areas seeing more severe declines than others. We attribute much of the decline to lower chick survival during the pre-July hatch as a result of excessive heat and dry weather during June. In most increasing years, the pre-July hatch provides the greater part of fall populations. In 2009 and 2010, both increasing years in the Red Hills, about 45% of the fall population of juveniles came from pre-July hatches. 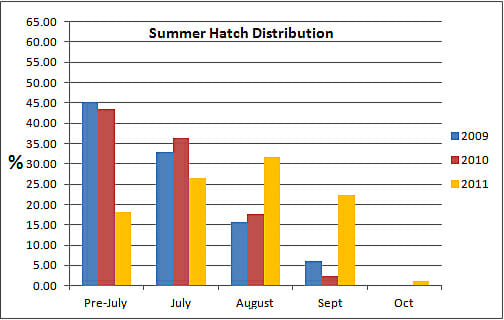 This year (2011), only 18% of the juveniles in the fall population were hatched from nests before July. Thankfully, there has been a region-wide late hatch this year. While the warm weather during October and November has made for difficult hunting conditions, it has helped keep the September hatched chicks alive. This year 56% of the fall juveniles were hatched in after August, which is nearly three-fold greater than the past two years. The late hatch may have biased covey call counts lower, as we suspect that coveys with young birds may call  less than those with fully grown birds. This is one reason why the peak calling of coveys has occurred in November rather than October this year. Hot dry weather makes for a challenging start to the hunting season, but while covey counts are down 30%, hunting success is down 50% or more on some properties. After some more rain and cool weather, we expect hunting to improve – more in line with existing population levels.

Warm weather may be helping to keep winter migrant avian predators from reaching our area, which is a plus. Thus far, survival of adults has been good. However, with less than normal amounts of cover, avian predation on bobwhites may be higher than normal this winter. Greater mortality from predation could be exasperated given that cotton rat populations have also declined during the drought offering less alternative prey to predators in general. As such, we anticipate higher overwinter mortality this year. A conservative harvest strategy may be warranted on some properties to help avoid a low carry-over of bobwhites into the 2012 breeding season. Harvesting 10% of the fall population is a conservative target to “shoot” for.