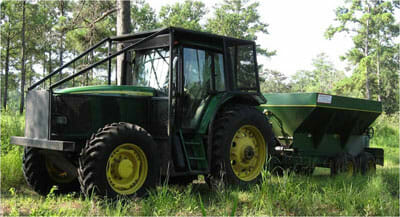 Supplemental feeding is critical to sustain bobwhite numbers, and especially so during periods of drought. Spikes in grain prices have recently made supplemental feeding costs skyrocket. Brad Mueller of American Wildlife Enterprises in Monticello Florida has developed a program with a regional, large-scale grain, storage facility to ultimately increase the buying power of the plantation community. By contracting with the storage facility, buyers can “book” grain for one year and lock in prices, if they choose, at the time of purchase. Or they can choose to pay as grain is delivered at market prices throughout the year. Traditionally, grain prices are lowest immediately after the harvest season and begin to climb during late winter peaking during summer.

Tall Timbers and several other properties now contract their grain through American Wildlife Enterprises and, at least the past year, saved on grain costs. While prices of grain fluctuate daily, recent prices have declined to near their lowest level is months. For more information contact Brad at 850-997-3551 or 850-508-4111.