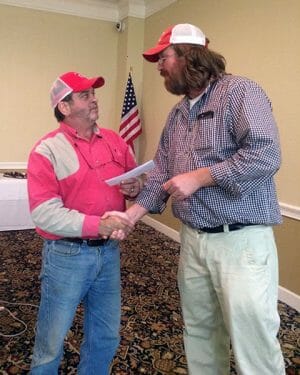 In just a little over two years as a chapter, the Southwest Georgia Chapter of Quail Forever has become a major player in quail restoration efforts. Through chapter banquets and the annual Georgia Quail Invitational hunt event held annually in January, the chapter has donated nearly $170,000 to habitat, youth, and public awareness programs in southwest Georgia. Over $60,000 has gone to the Florida-Georgia Quail Coalition (described below) for quail habitat work on public lands. Other funds have gone to support the work of the Albany Quail Project program at Tall Timbers, youth shooting sports, and other worthy programs such as the Wounded Veterans Hunt. Tall Timbers wanted to take this opportunity to thank this group of conservationist and recognize their efforts. The officers of the chapter are listed below; tell them thank you if you get the chance. For more information on the Southwest Georgia Quail Forever Chapter go to quail@swgaquailforever.org or call 229-435-7721 and ask for Sandy Gregors.